I did it again!
I watched another Sharknado movie!
What is wrong with me?

In case you're wondering - the movie was AWFUL!!
Besides the AWFUL story line - the actors were AWFUL too.
I thought those people were supposed to take acting lessons if they wanted to be in a movie.

I do have to give "The Most Epic Death Scene" award to Frankie Muniz (as mechanic Lucas Stevens) though.
He had to get to the RV they had outfitted to look like something from Road Warriors, to hit some kind of destruct button that was on top of the thing.  (Why it was on the top of the RV, I don't know)  Well anyways, he runs to the back of the RV and a shark comes out of nowhere and bites off his right leg, he keeps going, hopping to get to the door.  As soon as he opens the door, another shark comes and bites off his left arm.  Poor guy.  He gets in the RV and somehow gets thru the opening at the top and is crawling to the destruct button when a shark bites off his other leg.  Oh my God, seriously?  Well, the poor guy is still trying to get to that button - bless his heart - when yet another shark comes and bites off his right arm!!  Yes - mechanic Lucas Stevens has no arms or legs but he's still moving to get to that destruct button!!  I don't know how he's moving, but he's doing it.  He finally gets to the button and pushes it with his chin and the RV blows up with him on it.
I seriously don't know what the point of that was, but it most definitely was "The Most Epic Death Scene" ever! 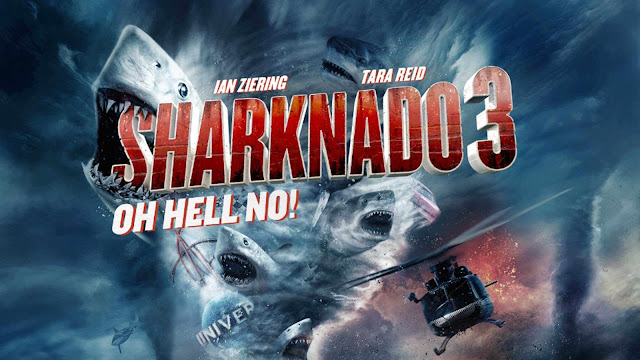 Erica sent me a picture of a ripple blanket that she wants me to crochet for the new baby.  I went to AC Moore and bought new skeins of Bernat Super Value yarn in grey and white.  The Super Value skeins are 7 oz.
After I had crocheted the same amount of each skein into the blanket, I had different amounts left over. 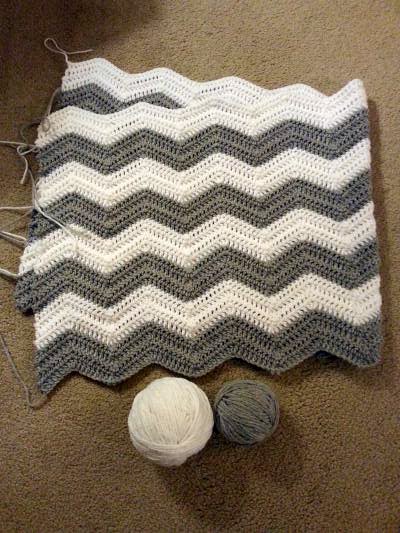 The white is a tad bit thinner than the grey, so maybe that is why, but I did weigh each of the next 2 skeins and the white skein was 7 1/2 oz.
So - I'm not mad because the skein was more instead of less, but I do see a problem happening with pattern designers.
Say you want to design a hat - you start with a new skein of 7 oz. yarn - you crochet your hat, and when you go to write your pattern you need to know how much yarn you used.  If it's a solid color hat - it's not a problem really - just weigh the hat.  But if you have a multi color hat, that could be a problem.  You weigh what is left of the skein and minus that from 7 oz. and you will get how much of that color you used for your hat.  Or do you?  Was the brand new skein actually 7 oz, or was it more or less?  Hmmm.
From now on, if I'm designing a pattern, I will weigh the skeins first just to make sure.
I hope none of my patterns are wrong. 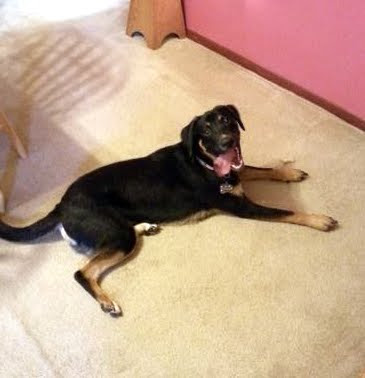 Erica came for a visit yesterday and she brought my grandpuppy Titan with her.  He's getting so big now - she told me he weighs 55 lbs.
You can definitely tell Titan is a puppy - he is so full of energy.  All he did was run and jump.  He even knocked over a couple of things with his tail because it was wagging back and forth at 50 miles an hour.
Ladybug - on the other hand - does this 90% of the time: 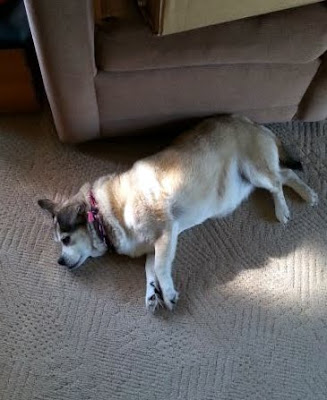 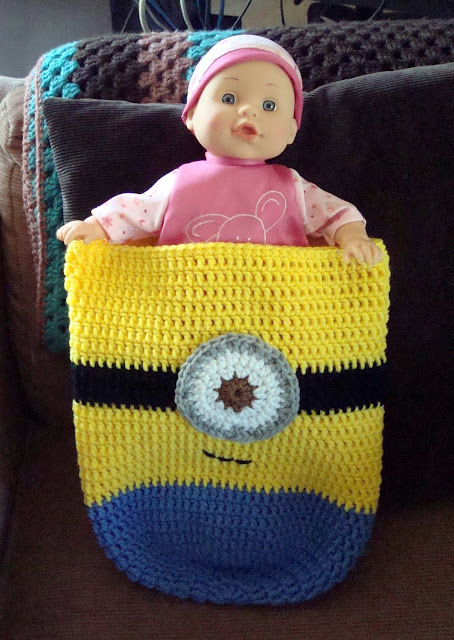 Notes;
- I crochet tight, so you may need to adjust the size of your hook.
- the ch 2 at the beginning of all rnds does not count as a st. 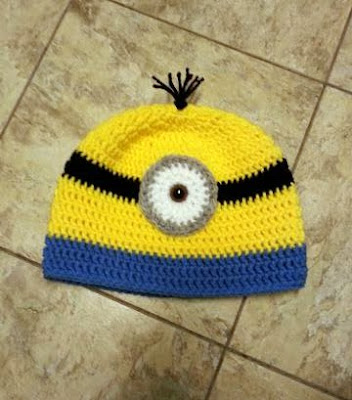 I know I'm a little late to the party with these Minion patterns, but I couldn't resist.  :)

Notes:
- I crochet tight, so you may need to adjust the size of your hook.
- the ch 2 at the beginning of rnds does not count as a stitch

Here's a little Minion coaster I thought was cute. 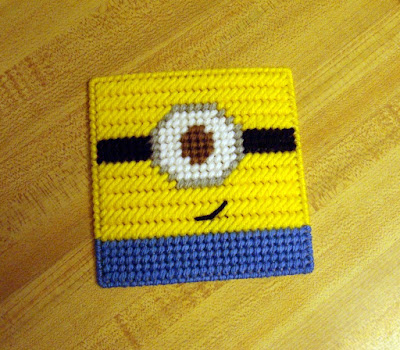 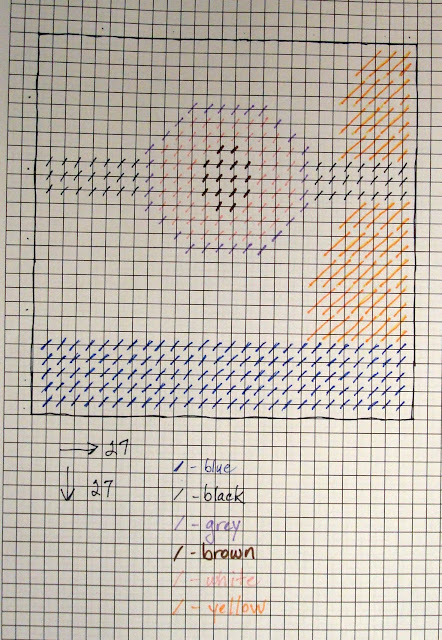 These projects were shown in the video, but I'm adding them here in case you can't watch it.

Yarn I bought from Pam (Yarnie Nana) on Etsy -
https://www.etsy.com/il-en/shop/YarnieNana?ref=pr_faveshops 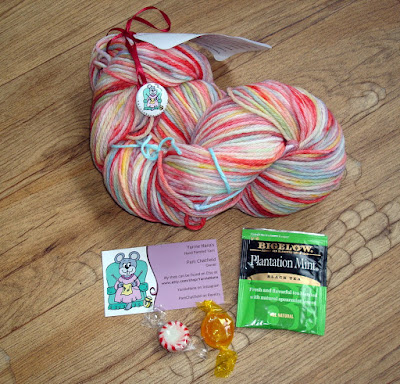 Yarn I bought from Walmart. 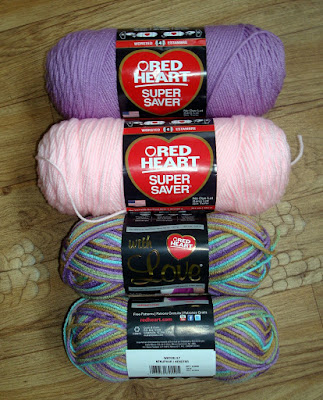 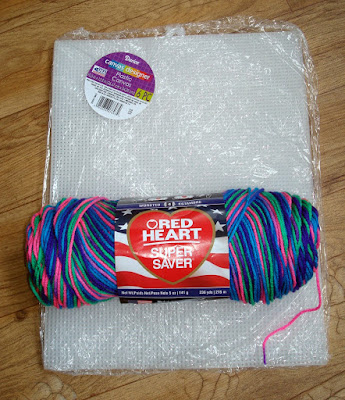 A mandala that I crocheted in honor of Wink of 'A Creative Being'.
http://www.acreativebeing.com/ 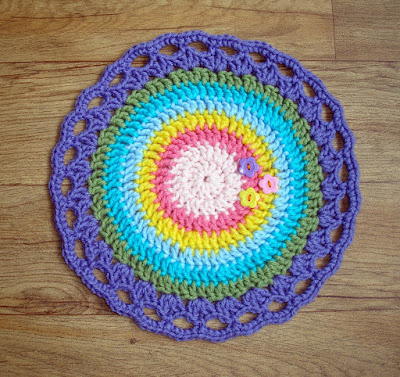 A 3-strand yarn basket with a leather tag that my husband Vince cut out for me.  I stamped the word 'yarn' on it. 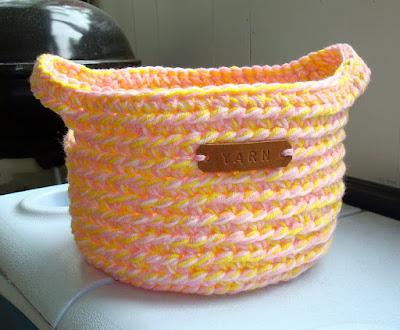 The memory box that Laura made for my granddaughter. 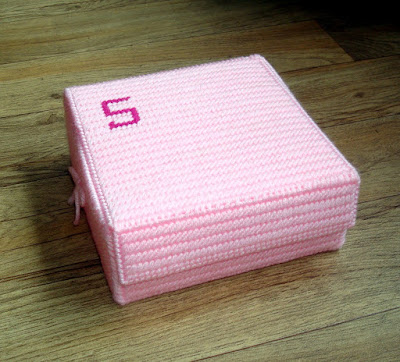 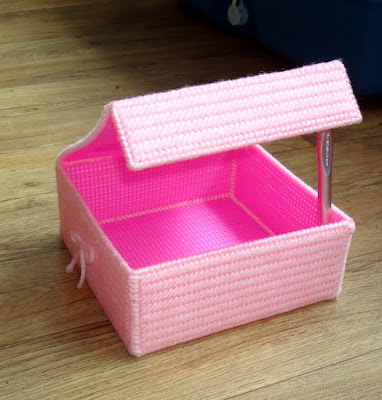 Cigarette cases and lighter covers that Laura made. 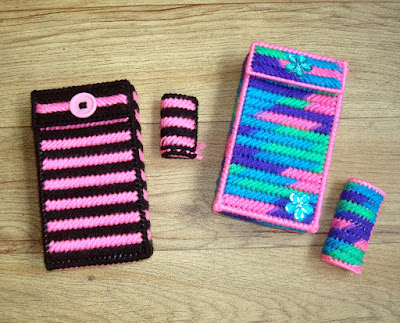 Scissor protectors that Laura also made. 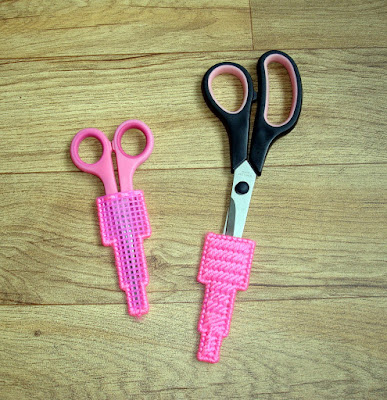 Headbands that I crocheted on.  The headbands were bought from the Dollar Tree - they come in a pack of 3. 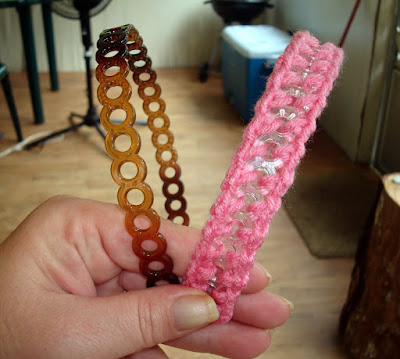 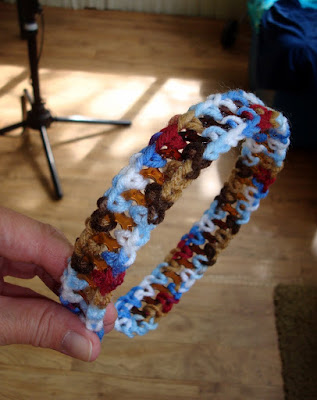 Nephew Spencer found this bottle and gave it to me.  I added flowers (from the Dollar Tree) and crocheted a band to go around it. 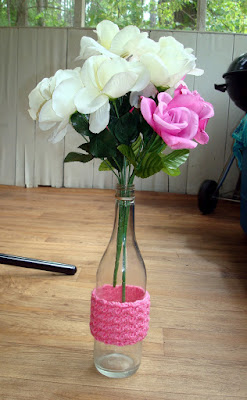 Great-nephew Wyatt also gave me a 'nice' bottle to add flowers to.  :) 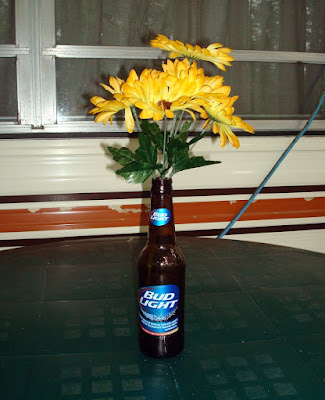 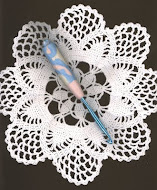